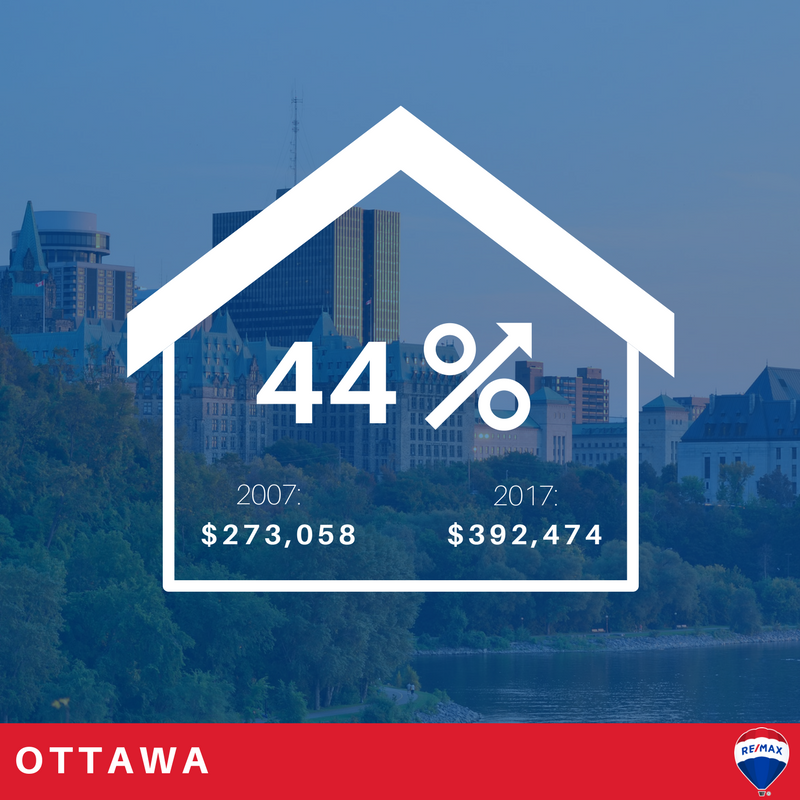 Last year may have started with a whimper, but it ended with a bang as homebuyers in the Ottawa area awoke from a long slumber. By the fourth quarter of 2017, Ottawa’s balanced market had moved into classic sellers’ territory, complete with tight inventory levels and upward pressure on prices. Confident purchasers moved forward and by year-end, more than 17,000 homes had changed hands—a 10-per-cent increase over 2016 levels.

September 2017 marked the turning point for Ottawa’s housing market, which has faced some challenges over the past 10 years. After a strong run-up in home-buying activity between 2000 and 2012, housing sales in the nation’s capital softened, in large part due to an oversupply of new condominium product. After almost six years, the supply of condominiums has slowly been absorbed, prices have firmed up, and more balanced conditions have returned to the condominium market. Average price for all properties (residential and condominium) appreciated 44 per cent in Ottawa in the last decade, rising from $273,058 in 2007 to $392,474 in 2017—an annually compounded rate of 3.69 per cent.

From an economic standpoint, Ottawa is well-positioned for the future, with the stability of the civil service sector and a strengthening high-tech sector supporting continued growth. The population has steadily increased in Ottawa-Gatineau, with the Census reporting a nine-per-cent increase between 2006 and 2011, and a 5.5-per-cent increase between 2011 and 2016. Furthermore, unemployment levels in Ottawa have slowly declined, hovering at 5.7 per cent in December. A number of projects are underway in the city, including the development of Light Rail Transit System. Housing starts were up six per cent in the single-detached category in 2017. The redevelopment plans recently announced for LeBreton Flats will also create thousands of jobs in the city. The project is expected to include public green space, a major event centre, aqueducts, a community ice rink, ability centre, and public art axis and innovation promenade. Shopify’s plans to increase its workforce also bodes well for the local economy.

So far, 2018 is off to a good start. Local buyers, foreign investors and government transfers are expected to buoy home-buying activity in the year ahead. Single-detached homes will experience the strongest demand in coming months, with bidding wars erupting on well-priced properties.

First- time buyers will lead the charge for starter homes priced at $400,000 plus, but will face limited supply throughout the city. Move-up price points (ranging from $500,000 to $700,000) are also affected as shortages are coming to light in that segment of the market. Affordability will drive the condominium market, particularly in the downtown core, as prices for freehold properties grow beyond reach for first-time buyers. The federal government’s newly introduced mortgage stress test is unlikely to deter first-time buyers, many of whom would already need to qualify for financing; however, the move-up segment, those that have 20 per cent down but also have accumulated additional debt, may find themselves in a more difficult situation.

Thinking about selling your home? Click here for your FREE, no obligation, home market evaluation!